Winner of the Green Award at Sheffield Doc/Fest this year, Pandora’s Promise is a documentary that will no doubt change your opinion of nuclear power. It is a compelling piece of dogmatic pro-nuclear reportage, and is important viewing for the pseudo-environmentalist who is predisposed to take the anti-nuclear stance under the de facto dichotomy of opinion that pervades the nuclear power debate.

Throughout the history of nuclear power – since the first nuclear power station that was connected to the grid opened in Obninsk, Russia, in 1954 – it has been plagued by its military heritage. Enriched uranium was originally produced through the efforts of World War II allied scientists, who by 1945 had engineered the two atomic weapons detonated above Hiroshima and Nagasaki. The devastating power of atomic weapons assuredly provided the framework for public opinion. In the mid-1950s, radioactive fallout from nuclear weapons testing, which had been extensive since before the bombings of Japan (Pandora’s Promise reports over 2000 atomic weapons tests), was drawn to public attention when a hydrogen bomb test in the Pacific Ocean contaminated a crew of Japanese fishermen. It was the impetus for the emergence of a global anti-nuclear weapons movement. Unfortunately, as this occurred around the emergence of the first Nuclear power station, the use of atomic energy for power was considered tantamount to putting a nation’s health at risk. This notion is correlative with the general estimations of nuclear power today.

Pandora’s Promise depicts US news broadcasts of images of total devastation in Fukushima following the tsunami that caused three of the Daiichi nuclear power reactors to shut down. But the story misleadingly ran as a ‘Nuclear power accident’ – the footage clearly portrayed a tsunami ravaged landscape.

Richard Rhodes, the Pulitzer Prize winning author of books such as The Making of the Atomic Bomb is one of the prevalent subjects of Pandora’s Promise. He remarks that the atomic bomb provided a window into Armageddon. With the experiences of Chernobyl, Three Mile Island and Fukushima cast indelibly into our consciousness, and the Cold War threat of nuclear attack, it is no wonder – especially with the aid of an over zealous media – that we are wary of nuclear energy. However, the scientific evidence against nuclear power stations is far less convincing than it should be. Without restating the statistics used in the film, it can be said that the casualty counts attributed to nuclear power stations is modest, especially when safety figures are made relative to fossil fuel power stations such as coal-fired plants, which have much higher mortality rates.

No radiation is safe, but generally there is nothing to worry about.

The director, Robert Stone, has approached the structure of the film with pedagogical intent. Stone conscribes five former nuclear power opponents to argue why nuclear power might be greener, cleaner and safer than many other energy sources. Deployed as metronomic talking heads, the subjects steadily add to the pool of pro-nuclear evidence that, by the end of the film, feels like an incontrovertible truth lodged in the back of your brain. They are, by virtue of Stone’s cynical estimate of the audience, meant to assuage the hard-to-swallow pro-nuclear rhetoric – and they do so very effectively. Slick infographics are dispersed between archive footage of past and present day anti-nuclear power activists. The images, as is emblematic of an advocacy documentary, are tied together with narration spoken by well-educated, articulate, often attractive people. One by one they reveal the reason they switch camps.

Pandora’s Promise certainly exhibits flagrant proselytism on behalf of both the director and its subjects, which, to an extent, is justifiable in light of the opinions that many anti-nuclear persons hold based on abstract and often incorrect material. However, the film persistently patronises the environmentalist movement through the technique of détournement: by inserting a narration that is contradictory to the message in the image, the change of context makes the images – specifically the archive footage of anti-nuclear protesters – antithetical in meaning to the original footage, which in this case converts the propagandist anti-nuclear picket sign holders, who are repeatedly shown in Pandora’s Promise, into ill-informed zealots. 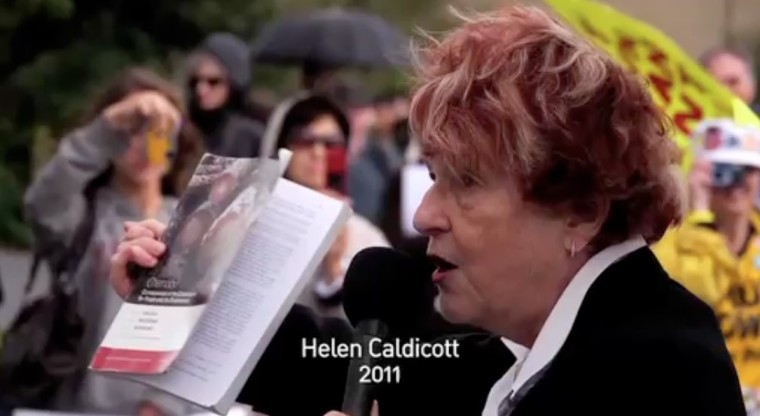 To give a specific example: Mark Lynas and Michael Shellenberger convincingly discredit the widely held opinions on the global health casualties attributed by nuclear power between images of Helen Caldicott, an Australian physician, author, and prominent anti-nuclear advocate. She is soapboxing at an anti-nuclear power rally, espousing the very facts that the two men discuss as farcical in the face of reports released by the World Health Organisation, the United Nations and other respected public heath experts. To further parody the plight of the anti-nuclear activist, Calidicott is ambushed post-rant and made to parody herself when she declares that ‘climate change deniers are idiots…how dare they deny science’ (the film had just put forth that climate change deniers had the same opinion of the UN as Caldicott).

To provide completeness on this subject, here is the response of Stone (from the official Pandora’s Promise webpage) when asked why he didn’t include interviews with credible opponents of nuclear power in the film:

The film is unapologetic in having a point of view. But it’s a view that is grounded in hard, peer-reviewed science, not anecdotes, mythology and outdated political dogma. Should Al Gore also be criticized for not including interviews with credible climate skeptics in An Inconvenient Truth? Of course not.

In a similar, less cynical use of an environmentalist refrain, Stewart Brand (who defined 70s counterculture with the Whole Earth Catalog) re-poses the quintessential question of the anti-nuclear movement that instantly readjusts the viewers’ perception of environmentalism.

Although there are many misconceptions about nuclear reactors, most prevalent may be the belief that reactors are consistent in their design. Thankfully Pandora’s Promise addresses this issue and makes clear the relationship between the first generation nuclear reactors and their commercialisation. Progress lead to the production of the one type, the Light Water Reactor (LWR), that remains prevalent worldwide today. The LWR was one of two original designs that were potentials for further investment and development. The other design, the Breeder Reactor, was a less wasteful design as it could breed plutonium and recycle it for reuse, but it was more complex and so was seen as the long-term design of the future by many scientists. Admiral Rickover, ‘Father of the Nuclear Navy’, directed the original development of US naval nuclear propulsion. He chose the LWR as the reactor that would power the USS Nautilus: the world’s first nuclear powered vessel. With the influence of Admiral Rickover and the threat of the Soviet Union, who had kept pace with America in the development of nuclear power technology and were thought to be in a position to control the potential European nuclear market, the LWR was commercialised. Following a speech to the UN under the same name, President Eisenhower launched the ‘Atoms for Peace’ program that supplied equipment and information to institutions throughout the world. The first reactors built in Iran and Pakistan were built under this program. We now have over 50 years worth of LWRs with over 400 plants globally that produce more waste – some of which will remain ‘hot’ for over 100,000 years – than was ever intended. In Pandora’s Promise this waste is measured as the “price we paid for commercialism”. Furthermore, since the first LWR commercial plant at Shippingport, Pennsylvania – which was an enlarged version of the submarine reactor – safety has had to be engineered around the reactors using cooling systems and containment buildings that were implemented as precautionary devices in the event of a failure. Chernobyl had little to no adequate containment vessel.

Stone’s contemporaneous filmmaker Adam Curtis deftly articulates the role of business in the choice of the first generation nuclear reactors that would eventually become the model design for reactors across the world, and that scaling-up would prove conducive to serious failures. And it would, as was the case with Three Mile Island, Chernobyl and Fukushima, cause fatalities.

Still from A is for Atom. Dir. John Sutherland

In a more recent blog post, Curtis gives evidence that the early American plants – the Boiling Water Reactors – provided the model on which the Fukushima Daiichi plant was based, and that the same year the Fukushima plant came online the Atomic Energy Commission (AEC) ran a series of tests on the emergency core cooling systems, in which the emergency systems worked, but the water failed to fill the core. An AEC scientist later admitted that their “theoretical calculations didn’t have a strong correlation with reality.” This warning, and others beforehand, were ignored by the agency and the industry. Curtis, as is his custom, often elicits fear in the audience. In the context of the neoliberal agenda (one of Curtis’ main themes) the construction of large nuclear power plants commissioned by corporations such as GE and Westinghouse Electric is sure to unsettle viewers. However, the strong political overtones of Curtis’s work undermine the more general nuclear power discussion. And this is indicative of the nuclear debate in general. The right has traditionally advocated the use of large-scale nuclear power (it has also supported nuclear warheads), and the environmentalist movement has its roots firmly planted in the left. This has created a mutually damaging set of groups whose partisanship doesn’t allow them to enter a debate on the subject. It is misguided to suggest that opinion on nuclear power gets drawn on whichever political plot you stand – as an article, using a Berkeley survey, aims to illustrate – but it goes some way to explaining why Pandora’s Promise uses liberal environmentalists to expound the benefits of a world powered by atomic energy.

Incidentally, both Stone and Curtis have used footage from A is for Atom: a film sponsored by General Electric and made by John Sutherland. Adam Curtis’s documentary A is for Atom (the namesake of the GE production), which was one of a six-part Bafta-winning TV documentary series, coincidentally entitled Pandora’s Box.

Curtis subtitles his series  A fable from the age of science, which intimates that there are lessons to be learnt from, and in spite of, political and scientific rationalism. In the films he attempts to illustrate the “cartoon-like version of reality” that we live in. Stone displays similar glimpses of wit when he alludes to the good/evil dichotomy. However, through watching Pandora’s Promise it is clear that Stone proposes a distinctly positive future in the face of climate change, that should – without the apologetic caveat (France, who have no coal reserves and didn’t wish to be reliant on other European gas supplies, stated that it had no other choice than to embrace nuclear power) that governments use to control the reservations of the anti-nuclear public – embrace a nuclear powered future. However, in reality nuclear power developments are falling in comparison with other renewable technologies, and it is mainly India and China that persists in substantially increasing its nuclear stock, which will primarily be LWRs. With the world looking to developing countries, which, through urbanisation and increased energy usage, is raising the standard of living for the Global South, they have been deemed pivotal in the future fight against climate change.

Pandora’s Promise asserts itself on behalf of pragmatism. Robert Stone is challenging the current approach towards tackling climate change and believes the answer lies with nuclear power. The proverbial elephant throughout the film, that renewables advocates will be acutely aware of, is the financial costs of nuclear power. LWRs have seen little to no reduction in costs over the past few decades; most reactors are designed to be site-specific and relevant to the reactor used (However, many of France’s Reactors are variants on a standardised design, somewhat reducing the capital costs involved with making the country 80 per cent reliant on Nuclear power).  Nevertheless, Pandora’s Promise and its subjects by avoiding conjecture put forth a persuasive argument for the advocacy of nuclear power.