“Why did I build it? Because I could.” Billionaire David Seigel is referring to Westgate Tower, the tallest skyscraper in Las Vegas that houses his company, but he could be equally talking about his new planned residence, a gargantuan complex modelled on the Palace of Versailles that has earned the tag of ‘the biggest house in America.’ Seigel appeared to have unlimited wealth until the 2008 financial crisis hit, and what we witness is his family’s trajectory from riches to rags. What started initially by filmmaker Lauren Greenfield as an examination on wealth turns into a tragicomic tale of the American dream and how one’s greed can lead to their own downfall.

David Seigel made his fortune in the timeshare industry, exploiting people’s desire to live in a fancy house even if they can only afford to own it for one week a year. Along with these riches he accrued a trophy wife in Jacqueline Seigel. A former Miss America, her life and the house she lives in could all be part of some fairytale fantasy. Only here the European decadence is replaced by corporate American greed, an empire built on timeshares rather than gold or diamonds. It would be easy to assume that Jackie is just a blonde bimbo who is used to being spoilt by men but that is not the case. From a poor rural background, she went to college in order to be an engineer, but after finding this unrewarding she decided to take the easy route and traded her looks for a life of luxury. Upon meeting David and basking in his initial love and riches she states, “It felt wonderful to be so adored.” Times get tough when the recession forces cost-cutting measures on the household, as Jackie struggles to adapt to living a life with limitations.

There are many humorous moments as we watch Jackie act as if she holds a blank cheque. She rides a limo to go to McDonalds, and after buying a new bike for the children her maid simply adds it to the dozens of others cluttering the garage. As well as the many children scurrying about the world’s largest playpen, there are also numerous pets around, defecating at will due to not being house trained. Jackie accuses one of her children of neglecting a pet upon discovering a dead lizard in their room, to which they reply, “I didn’t even know we had a lizard.” Moments like these are very funny, but one feels the audience is overly accustomed to such observational documentaries through the large amount of reality programming on TV. Shows like ‘The Only Way Is Essex’ and ‘‘The Osbournes’ already provide a window onto the rich and/or famous, allowing the audience to simultaneously ridicule and aspire to such lifestyles. 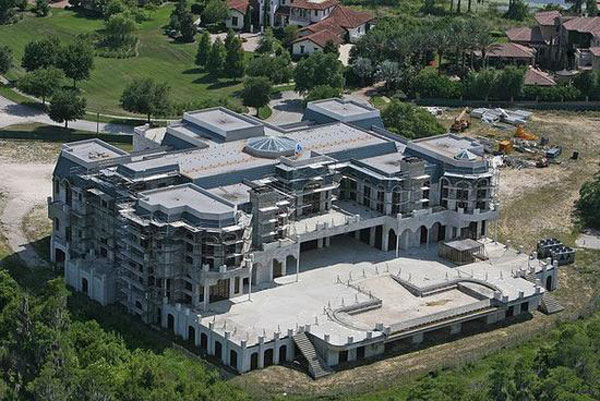 What is of far more interest are the people outside of the Seigel family that provide a real insight into the sacrifices one makes to achieve material gain. At one point Jackie visits an old school friend Tina whose life has taken a very different turn. Her poor income and struggle to survive perfectly highlights that for every person who luckily finds a fortune, there are many more who are left to toil the rest of their lives. Upon learning that her house is up for foreclosure, Jackie dispenses $5,000 in the mail. She is later surprised to find this doesn’t help, revealing how out of touch she is with both the cost of living and her former friend. The Filipina Maid Virginia speaks of how she abandoned her own children back home in order to make a living in America. She states how she can’t afford to return, but can only keep on sending money back to her family, and sadly notes that after not seeing her children in twenty years the little Seigel’s are her family now. The old children’s dollhouse she lives in poses a fantastic counterpoint to the grandeur of Versailles, and her speech on her father always wanting his own concrete home and finally succeeding upon having his own tomb is incredibly touching. Whether one is rich or poor, when slaving for the material something personal is lost that no money can regain.

As things gets worse and worse for the Seigels one expects at any moment for the film to follow a classic Hollywood narrative and turn their fortunes around. Perhaps David thought that as well, as there can be no other reason why he would allow a film crew to be so intrusive into his life and record his empire crumble around him. The old and grouchy patriarch is rendered impotent by the financial crisis, and steadfastly refuses to give up his skyscraper, a source of phallic mastery that dominates the Las Vegas cityscape. Instead he is reduced to lambasting his family over not switching off the lights, an empty gesture when you’re 300 million in debt and your house has over twenty bathrooms.

Ultimately David is presented with a choice; give up your company’s skyscraper and live happily in comfortable wealth, or don’t and face losing everything. Despite the former seeming the smart business option, there is too much at stake personally for David to give up his Supertall structure. His own parents lost everything gambling in Vegas and so to return there and build the cities biggest tower is seen by him as his greatest triumph and redemption for the family. It would be too painful to lose his ‘Rosebud’ and leave the city a failure like his forebears. And so as the film closes we are left with David, locked away in his study, poring over his records and desperately seeking a solution. The American Dream for many has turned from seeking success to refusing to recognise failure, even when it stares you straight in the face.