Family Portrait in Black and White: Interview with Julia Ivanova 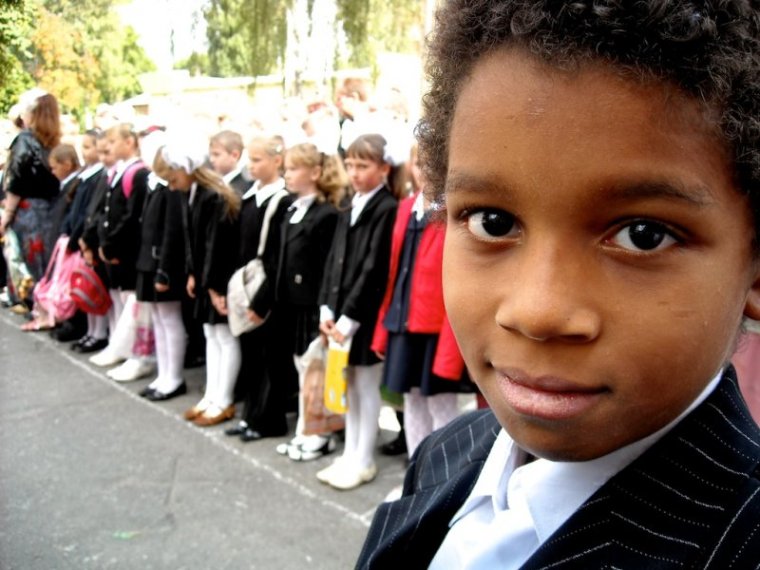 Russian-Canadian filmmaker Julia Ivanova’s documentary Family Portrait in Black and White (2011) is not as its title would suggest.

Shot in Ukraine at a time of unrest and intolerance, the film paints life in Olga Nenya’s foster home with a whole spectrum of colours, and is as complicated in its themes as the identities of the 16 mixed race children living in it. The direction and editing is sensitive to the emotions, thoughts, and hopes of the children, and observes the complex issues of motherhood at play within the family, as well as the racist undertones the children are consistently subjected to in their own country.

We met with Julia Ivanova at the Ritzy, Brixton, to discuss her experiences making the film.

RTR: How long did it take to film all that footage and edit it together?

JI: Filming was actually fast. I filmed the first year for three weeks, then for 10 days the second year, and for a week the third year. I was very lucky because the children were so amazing and complex and open and entertaining, so we had tonnes of footage. Never with any of my previous films did I have such a great abundance of material. And editing of course was way more difficult because you need to build the story. I knew I wanted it to first show the mother as a perfect and ideal person and that it’s like a paradise, and then I would question it. Then by the end again I would bring it back to feeling that she’s actually a good mother, because the alternative is not to have any mother and be at the mercy of the state. So editing was difficult. It took me many many months.

Were you always intending to have themes of communism and individual freedom in your film or was that something that cropped up later on while you were filming?

I went without preconceived ideas. The only thing I wanted to show was how these black children, who have no connection to Africa, no connection to any other culture other than Ukrainian, and how they live in a society that is so tense towards them. For any documentary filmmaker it is extremely important to keep your eyes open,  and be very attentive to what is happening around you, and of course very fast we started to get a way more complex picture with many issues interconnected, so that’s how it happened. And of course I was very happy that all Olga was a person that’s very soviet with pluses and minuses. A plus being that she’s a very heroic woman and the minus is that she’s a person of a system. She believes in the system and not in individuality.

Has she seen the film and if so do you know what she thought of it? She was described as a dictator by one of the children, what did she think of that?

She said ‘well I don’t know what all this fuss is about’, ‘why does this film go to all these festivals’. She wasn’t very impressed, and that’s what she said to all the children. Of course for her it is very unpleasant that Kiril calls her Stalin and that he accuses her of not giving them freedom and not respecting their will, because she doesn’t see why it is necessary. So I have no doubt that she feels that I betrayed her a little bit, but she felt that after she learned that I continued to communicate with Kiril. I’m planning to call her. I haven’t yet called her. 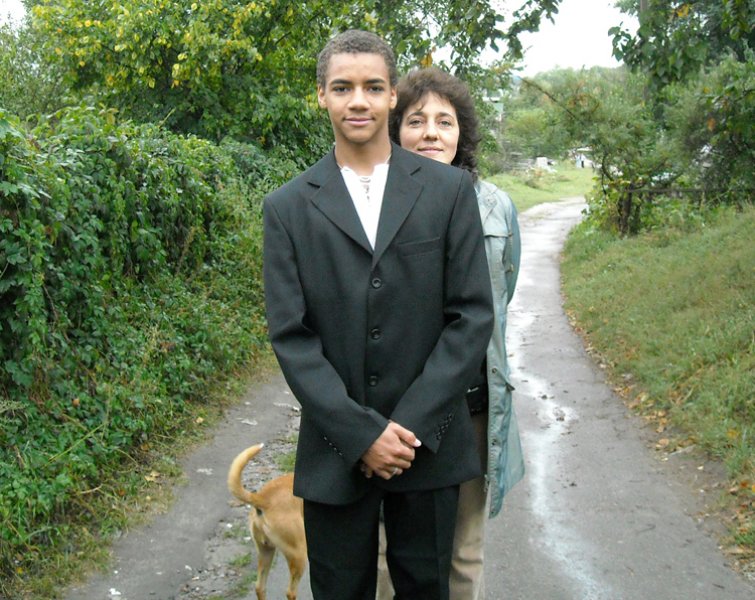 Near the end Kiril talks about a reunion where the family might get together and talk about where they’ve ended up. Do you plan on filming that some day and going back to film the reunion?

Right now I don’t think I have plans to make another instalment with these children, and the reason is that this film was very emotional. For me it was a very emotionally draining experience because I feel incredible sympathy for the children. I don’t see the future of these children being bright. I see the future of most of these children as a chain of unfortunate circumstance because they don’t have parents that could protect them. They don’t necessarily have an education that would help them. They don’t have money that would ensure that they can survive a certain period of time. There are lots of elements besides them looking differently in this society that works against them. So I will continue to be connected with them on a personal level, but not in terms of filming.

In the credits of the film, it mentions helping the family’s situation. Have you had more people coming forward saying we’d like to help out in some way?

Yes, I would say that little by little. Not in big amounts. We were hoping for a breakthrough. Recently after the film was shown on Canadian TV, we were contacted by a gentleman who is a black Sierra Leonian, and his wife is Russian. He is a professor of medicine and he started to help Olga, and he will try to help Kiril to come and study in Canada. So we need to find more people like that, so that we could help Roman, the soccer player, or Silver, the beautiful girl, or every single child in this family needs help when they leave Olga’s family, because it is impossible even to imagine that the moment they leave the family they are penniless. They will get some peanuts from the government while they study, but where will they live, what will they eat? I have no idea and I don’t think they have an idea.

How quick or easy was it for you to go into the family and for the kids and Olga to become accustomed to you being there with a camera and how easy was it for them to open up to you?

It took basically half a day. We started filming 15 minutes after we came. We introduced ourselves. Olga helped us, because she gathered everybody and she gave everybody the task of what they must do while she’s away with some of the kids shopping for the school uniform and off we went to the market to film them choosing their uniforms. It’s not that we were the first film crew that came there. There were many journalists that would come, stay there for half a day, a day. We were very different. We stayed there for three weeks for the first year, and then I was in touch with them and then they came back, but they opened up immediately. It is a rare case. 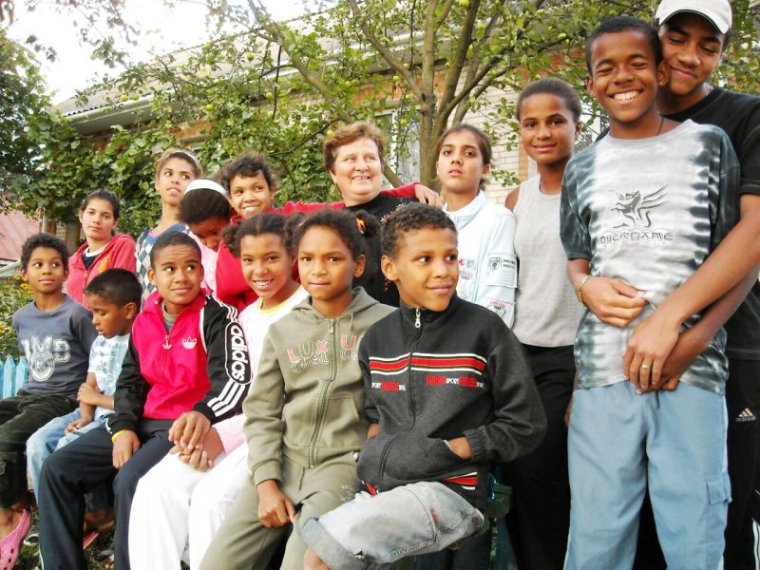 Olga and the family

It’s very intuitive with music. I personally like to edit pieces just with music. Small, short video clips. Music clips. I like that. I don’t like sentimental use of music. Like the moment when the music says now it’s time to cry, so I try not to put that kind of music and I try not to put music on when it’s time to cry. It’s important because quite often it is the case, and I made a couple of mistakes there I know, but overall the music is traditional Ukrainian music performed by a modern musician who uses 200 different instruments, and we recorded him playing 1 instrument and then another 10 and then it would be layered. His daughter is 8 years old and she is singing all these songs. His other daughter is 10 years old and she wrote the lyrics for all these songs. It is either traditional folk songs or it is the music performed by the 8 year old girl singing.

Have the authorities in Ukraine seen the film at all? Has there been any response from social services?

It’s a complex question with a complex answer. Of course my dream is to bring it to the authorities and throw it in their face. And ask them ‘why was the boy tortured at the mental institution?’ and of course I want the human rights organisations in England to approach Ukrainian authorities and ask why the 11 year old boy was subject to torture at the mental institution for children. He was not only beaten, he was wrapped in the wet cloth and left with a heel under his back, but the film hasn’t been shown in Ukraine. The reason is Olga, from the very beginning, she gave me only one condition under which I could come and film them. The condition was that the film wouldn’t be shown in Ukraine. She doesn’t want the attention of skinheads, and she doesn’t want the attention of the authorities, because the authorities are unpredictable. She’s a person who already has lots of enemies among authorities and they can see things in this film that they can use to say that the children should be apprehended because she’s not a perfect mother, so I haven’t shown it in Ukraine but I really want to show it, so I hope that one way or another we will negotiate with Olga because I want the authorities to be responsible for the conduct at the mental institution.

Going back to the skinheads, how did you make contact with those groups?

Overall? My Flesh and Blood. It’s about children, it’s about mothers, it’s a topic I like a lot.

I have so many that I like. Last Train Home. It’s about China. It’s Canadian documentary. This year’s film again Chinese-Canadian called The Vanishing Springlight. Also Senna – the editing is superb in this film. And some other films of course.