Open City Docs 2016: Thy Father’s Chair and In Limbo

Since the death of their parents, Orthodox Jewish twin brothers Abraham and Shraga have let their house become so cluttered, dirty and infested that their upstairs tenant refuses to pay the rent. The obligatory cleaning and documentary crew turn up to unpick the issues.

What are the emotional imbalances that have led them to indiscriminately accumulate all this stuff? Has grief made them unable to throw anything away? Those are the questions we are trained to ask of the people who fail established modes of object conduct – what sociologists define as “the manner by which individuals socially and personally engage with matter.”1 This has proven popular with both ‘lowest common-denominator’ television coverage – Britain’s Biggest Hoarders – and the sphere of cult documentary – Grey Gardens. Yet Thy Father’s Chair is difficult to place, and so are the intentions of those who made it.

Abraham and Shraga are not easy to watch, or even tell apart. Their personal troubles are significant, yet it is difficult to link them to the squalor they have repeatedly chosen to live in. This is perhaps the film’s strongest attribute.

“What are you afraid of?” the voice behind the camera asks one of the brothers as the cleaning gets underway, to which he replies “things getting lost… Thrown away… And just having to look through everything.”

This projected fear (Hebrew: pachad) is personally easy to identify with. From the perspective of an archivist, the brothers’ house is representative of common issues in archival appraisal and arrangement. Their housekeeping preferences for not throwing much away are controversial, yet hold similarities with the behaviours of certain famous archivists – such as Henri Langlois, the founder of the Cinematheque Francaise, who believed that no archivist had the right to play God in deciding which films would live and which would die. As a result, the floors of his archive were often cramped with disorganised piles of films of varying conditions, much to the dismay of peers such as Ernest Lindgren (who set up what is now the BFI archive).

Of course Abraham and Shraga do not obsessively collect only one thing, and have trouble throwing away even old food, but the compulsion to hoard is not as alien as it is often painted on television. In Thy Father’s Chair‘s observational cinema, the opportunity for silence in the absence of the usual commentator helps the viewer to realise that they may not be the circus freaks that we expect them to be. 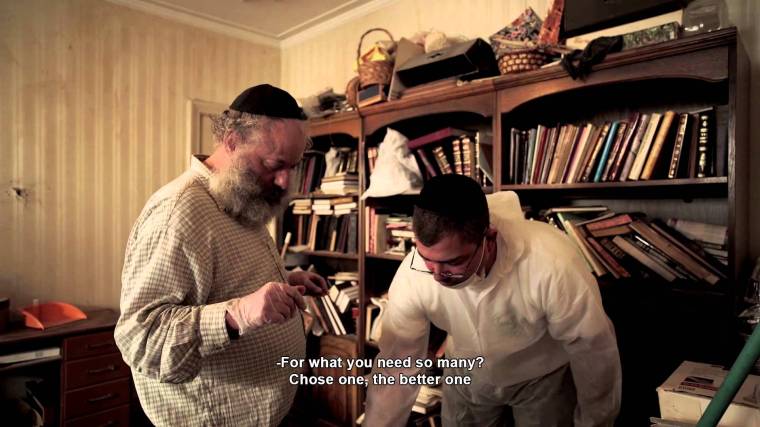 In his book The Hoarders: Material Deviance in Modern American Culture, Scott Herring asks “what counts as an acceptable material life? Who decides? Why is one material life commended while another is reviled? Who calls these shots?”2 These are the types of questions we should be asking when watching Abraham and Shraga struggle with the cleaners in their house. If important national collections can be built on what were essentially controversial hoarding compulsions, of (audiovisual) material that was initially dismissed for preservation by official bodies, then we can stop to think about the brothers’ experience with slightly less ridicule – even if what they keep may never evolve into conventional value.

And if volumes can be written about Andy Warhol’s hoards as art, we can stop degrading the behaviour of others by attributing it to mental disorders. To Warhol, “in his role of recording angel, every last scrap of rubbish had validity by virtue of being memorabilia – Zeitgeist minutiae.”3 While this was done in a warehouse setting, and didn’t result in the mould and families of bed-bugs that the brothers helped to grow through their hoarding, the concept of collecting every last scrap of rubbish was very much the same, and it divided the art world as it should divide us.

Arguably, today, more than any time in history, we may find empathy with Shraga and Abraham through examining our own increased submissions into digital material deviance. This was (unexpectedly) supported by another film screening at Open City Docs Fest. 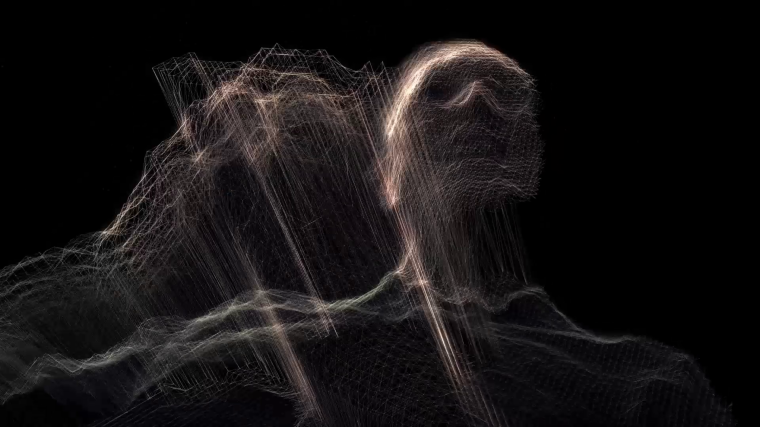 Antoine Viviani’s In Limbo explores the so-called “limbo of our global interconnected memory” through a journey into the Internet narrated by Nancy Huston. The film meanders through home movies, internet clips, and shots of people with their devices, meeting different characters (computer engineers, artists, CEOs) whose interviews are captured by a Kinect camera, digitized and converted into lines of code. Think Richard Linklater’s Waking Life rotoscoping but with data.

One character explains, “I’ve been wearing a life-long device, a camera since 2006 almost all of the time. So much so that now I’ve got around about 12 and a half million photographs. And I never look at them. It’s not important.” The idea here is that we can start to gather “really detailed archives of what we do”, without having to do anything, or even think about it. This idea is painted as progress, yet in the archives sector throws up various logistical nightmares regarding future access – storage, contextualisation, obsolescence and retrieval.

Without taking sides on what kind of data we should be generating, and how much of it, it is hard to overlook the similarities between hoarding compulsions in the physical and digital worlds. We have, at times, stopped discriminating on questions of value. Life-logging in all its various forms is now a digital form of hoarding. It is more socially acceptable because the unspeakable amounts of data are out of sight, and the chaos of a disorganised, full-to-capacity (possibly virus-ridden) hard drive does not make for as entertaining a viewing as the cluttered dirty houses of people like Shraga and Abraham. Yet a lot of people can readily identify that “just having to look through everything” is the contemporary object of dread.

Scott Herring admits, “I have no right to judge, with my own house made of most brittle glass” and adds that “with so much ink spilled over the damage that hoarders do, I also think that we rarely mention the hurt of those who foster the discourse.”6 To separate the organisational instincts of Shraga and Abraham as unhealthy is to overlook the direction in which we all appear to be heading. Chaos.

In Viviani’s film we meet Gordon Bell, an internet and computer pioneer, who admits that “with all of this material you can create, my biggest concern right now is that I have not spent much time telling people how to look at my system so that they can find out what’s in there and be able to make some sense out of it.” If a cleaning team was sent into our digital footprint and made to throw things out, we, like the brothers, would dread being intimidated by them.

The film’s camera wanders through church-like data centres and isilons. One character comments on how human beings have always considered themselves to be the closest thing to God. “We thought we could control everything. In our attempt to control everything we actually, in the end, created something that we do not control and maybe cannot understand.”