The Greatest Shows on Earth: A Century of Copyright and Cultural Property

The idea that it’s better to ask for forgiveness rather than permission has permeated the attitudes of documentary film-makers today, and was a talking point at this year’s Sheffield Doc/Fest. Poppy Stockell, speaking at Death to the Selfie or Why it’s Better to Share an Image of an Owl or One’s Cat, argued that it is this kind of approach that accounts for the higher volume of women in the documentary industry compared to fiction film-making, which was said to operate under stricter hierarchies of judgement and funding models. She illustrated this point by describing creative solutions to obstacles in the early stages of her career, such as borrowing camera equipment from her workplace without permission, the ability to act with relative autonomy and side-stepping traditional processes.

Brett Morgen similarly said that there are far less rules and restrictions in documentaries, comparing the genre to the Wild West. “The only limitations are ourselves – the way we police ourselves” he said in his masterclass on his latest film Cobain: Montage of Heck.

It’s enough to make you giddy with excitement, and wonder why you weren’t the one to make the film. (The answer being that you’re not a well-connected director granted permission to use the archives by the Cobain estate). While Morgen is right about the limitless stylistic possibilities in non-fiction, the anarchic ideas come to a halt once intellectual property law [literally] comes into the picture.

Archival films are an area of the industry where asking for forgiveness rather than permission will get a film-maker laughed out of the room, straight into court. Rights management and copyright clearance fund a large growing industry of commercial and historical audiovisual archives, and in this respect, the documentary industry’s renewed appreciation of archive compilations holds one of the most unattainable challenges to new, or financially deprived, film-makers.

There are several ways around this for them if they want to handle historical footage. They can hope to win the lottery, or have a go at making a 1 minute film for a commercial archive’s short film competition, to be used for its own promotion.

The industry’s saving grace is the ability to use some media in compliance with Fair Dealing legislation (or Fair Use in America), the complexity of which was explained in a panel talk with entertainment lawyers from SmithDehn, “A Comparative Perspective for Documentary Filmmakers on US and UK Compliance”. Its uses for feature-length compilations by independent film-makers were also presented by Charlie Lyne at last year’s festival, but while familiarity with Fair Use has interesting creative implications for the next generation of film-makers, it won’t apply to all ‘archival’ compilations – especially the ones that deal with national heritage and historical footage. 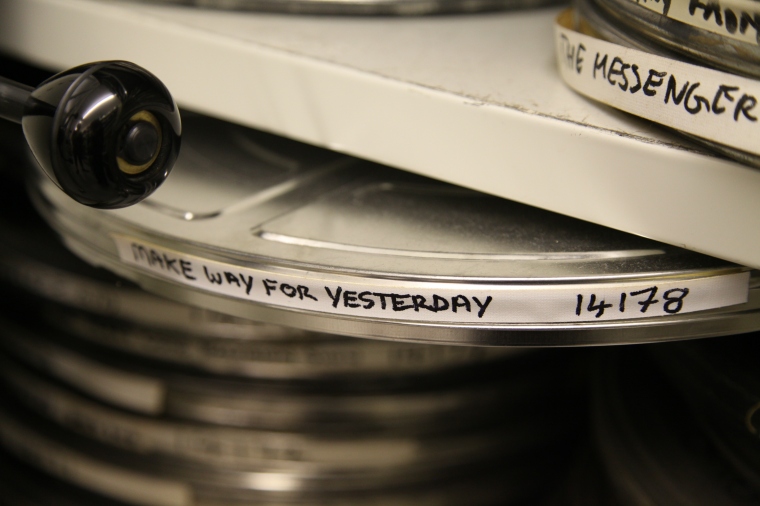 One of such films, The Greatest Shows on Earth: A Century of Vaudeville, Circuses and Carnivals launched the opening night of the festival and became the fourth archival collaboration of the kind to be presented at the festival, following Penny Woolcock’s From The Sea To The Land Beyond, Jarvis Cocker’s The Big Melt, and Kim Longinotto’s Love Is All.

During the film’s Q&A, the film’s director Benedikt Erlingsson expressed his interest in the archival films and how they might evolve in the future, however perhaps the real talking point is not the genre’s stylistic evolution but the democratisation of its access, which would in turn push the form into new creative directions. Progress hinges on whether these compilations continue to be products of established film-makers, producers and organisations, or whether the public is enabled and encouraged to reconstruct the past for themselves. It is questionable whether the making of archive films (legally) will ever be compared to the Wild West by their directors, but some of their restrictive components could be reduced through redistribution of funding towards public opportunities and competitions.

Rick Prelinger has argued that the 21st century archive, above all, “needs to recognize that it is a cultural producer playing a primary role in the dissemination and exchange of images and sounds, not simply a wholesale repository relying on presenters, producers and scholars to expose its treasures”, adding that “absent an aggressive and enthusiastic populism, the archives risk irrelevancy and increased marginalization.”

As we wait (perhaps in vain, perhaps not) for this to happen, watching producers and scholars take the lead has its obvious charms. Professor Vanessa Toulmin, the director of the National Fairground Archive and an academic leading in the field of 19th and 20th century circus and fairground entertainment, undoubtedly helped to put the great in the Greatest Shows on Earth compilation, and even with the film’s high production values, was not immune to the restrictions of intellectual property rights.

Rights clearance for the clip below of the Ross sisters would have reportedly bankrupted the film’s production and the footage was not included in the film. Without the limitations imposed on film budgets by the moving image business, The Greatest Shows on Earth could have arguably been even greater, so before we glamourise the lack of rules in the documentary world, let’s look to what’s happening in its latest trends.